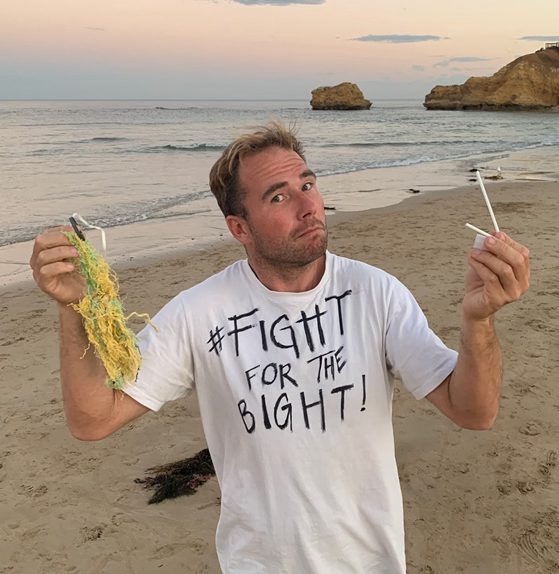 Damien Cole is a committee member of the Surf Coast Energy Group. He is also one of those rare breed of people that lives and breathes his principles. A strong connection to country, to people and to nature is how I would sum up Damo. Add the important ingredients of ‘at home in front of a crowd’, an excellent communicator, a quick thinker, lots of stamina and a good dash of personality and guess what? You have a politician. Damo would be the first to decry that label so let’s call him an aspiring community leader.

Damo’s first foray into activism really hit the launching pad when he ran for the Seat of South Barwon in the State election in November last year. As an independent candidate in a marginal seat much of his efforts aimed to put front and centre an 11 year community battle to achieve permanent town boundaries for Torquay/ Jan Juc, together with building height restrictions and saving Spring Creek. All this was achieved well before Election Day with both major party’s courting Damo’s preferences.

The experience has given Damo insights into skills he never knew he had, and spurred on by a truly significant win in the State election, Damo decided to run again as an Independent candidate in the Seat of Corangamite in the Federal election. This time a much bigger playing field but once again a marginal seat, and this time highlighting the climate emergency, drilling for deep sea oil in the Great Australian Bight, greater protection of nature in the Otways and at Bells; and greater equity for those in disadvantaged socio economic circumstances, including refugees on Manus and Nauru.

The big and exciting news in all this is that Corangamite bucked the national trend by backing in progressive policies. It is now clear that Labor’s win here in a marginal seat comes on the back of Damo’s preferences. So our community gets it. We do value nature. We do want strong action on climate and we do want policies that are fit for purpose in this 21st century.

What this suggests to me is that when a campaign action is eloquently explained people will listen- and even more importantly, when community leaders listen, they can then respond to community concerns. Clearly the people of North Queensland don’t want to deliberately destroy the Great Barrier Reef. They do want to escape dole queues. Community conversations that carry those important discussions make impossible scenarios possible. Damo is young, energetic and has against all odds strongly contested Seats where a prima facie summary would suggest it personally wasn’t worth the effort. However, at a community level he has been the difference. He has sacrificed a lot. We owe him a great deal. Thanks Damo.

“It’s about us drawing a line in the sand, to say we are sick of our government continuously allowing the abuse of mother nature, jeopardising our communities and our environment, all for the financial benefit of irresponsible corporations.

It’s a fight to say enough is enough! Our country has been devastated by countless environmental disasters just this summer, from fish kills in the Murray Darling Basin, bushfires decimating Tasmania, and flooding throughout Queensland.

Putting Australia, OUR HOME, at risk with the potential of an oil spill, whilst fueling the Climate Emergency to feed our societal addiction to fossil fuels is absolute insanity.

The increasing momentum for change in our community and the incredible team behind me is what drives me and makes me so proud to be running as an Independent candidate in the upcoming Federal Election. This is a grassroots campaign, a representation of our community, a group of volunteers working tirelessly to make positive change. And we’re just getting started.”