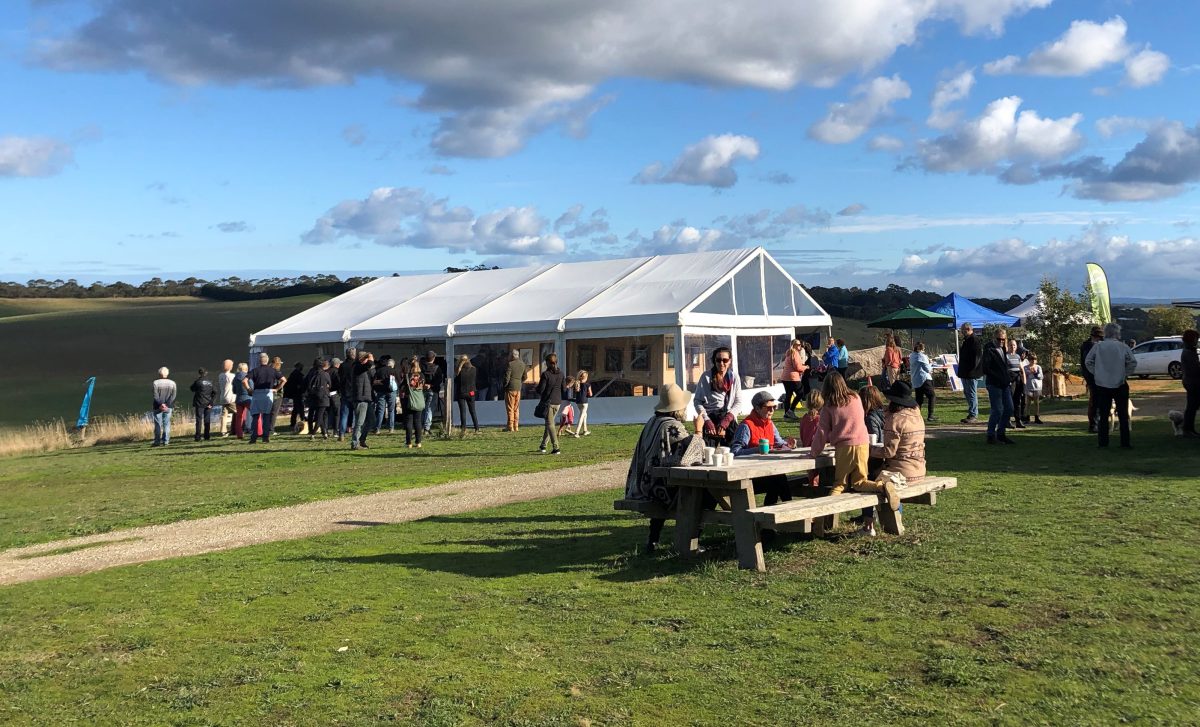 A day of celebration, conservation and ambition.

Public figures, politicians, activists, nature lovers, artists and other passionate supporters of the Spring Creek Valley gathered at Ashmore Arts on Saturday 28th May in collective celebration of the DAL decision to reject residential development west of Duffields Road. The event was organised by the Surf Coast Energy Group and funded by Foundation for Rural and Regional Renewal (FRRR).

The weather couldn’t have been kinder, with light winds and sunshine highlighting the exquisite backdrop of Spring Creek. A range of speakers described the community’s long journey that culminated in the DAL decision by Planning Minister Richard Wynne. The newly re-elected Libby Coker, Federal MP for Corangamite spoke about the victory, as did Darren Cheeseman (State Member for South Barwon) and Andy Meddick (Member for Western Victoria in the State Legislative Assembly).

Our local political figures also provided a cautionary warning of the battle to come and the need to continue a vigilant defense of the Spring Creek Valley in the face of well-resourced residential developers. Indeed, since then two developers have taken the State Government and the Surf Coast Shire to the Supreme Court in an attempt to overturn the decision.

The Spring Creek Valley event outlined further ideas about what the future of the Spring Creek Valley could look like as the community moves, in the words of SCEG’s Chair Graeme Stockton, from a protection to an ambition phase. He issued the warning that ‘doing nothing’ risked playing back into the hands of the developers. Instead, the conversation should focus on progressive community development models that could be implemented in the valley including: community purchase of land under a Land Trust arrangement to ensure its ongoing protection; regeneration of local ecosystems through continued tree planting and rewilding; relocalisation of food through regenerative agriculture. He also noted that the Spring Creek Valley should showcase Torquay’s economic advantages (nature, landscape and cultural significance including art) due to its location proximate to the Great Ocean Road, rather than be an economic value reducing  dormitory suburb of Geelong.

One of the key ideas presented was an Otways bio-link (see image below) to connect Torquay with the Otway Ranges. This would involve working with existing landowners to re-establish indigenous plants and animals in a linked network. While networks of this kind have biodiversity goals, they also have the potential to produce positive economic outcomes for farmers, landowners and the broader community. A number of case studies done elsewhere in Australia and overseas show that these outcomes are realistic. For example, the Odonata organisation of Nigel Sharp has demonstrated at Mt Rothwell near the You Yangs how the re-establishment of Eastern Barred Bandicoots to farm land can dramatically improve the top soil quality and depth, which in turn supports more profitable sheep farming.

SCEG’s Matt Fox outlined some possible futures for the Spring Creek Valley. This set the scene for place making and visioning to co-create the future of Spring Creek with the community and landowners.  And the afternoon ended leisurely, with guided walks into the Spring Creek valley, kindly hosted by Murray Johns (SCIPN) and Pete Crowcrowft.  Despite the site’s proximity to the Torquay township, access to the creek is limited – and so the walks provided a rare opportunity to view intact stands of Bellarine Yellow Gum along the riparian corridor.

Thanks to Liz Pattison Surf Coast Shire Deputy Mayor for welcoming attendees to the country and outlining the future process to change the zoning of Spring Creek Valley, as well as Councillor Mike Bodsworth for attending in support.  Big thanks also to Stu Guthrie and Mark Trinham for their support in hosting the event at Ashmore Arts, and to all who came in support.